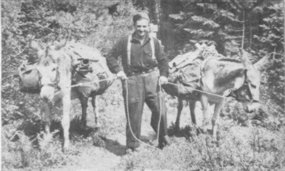 Burros are sometimes used to tote fish cans part of the way. 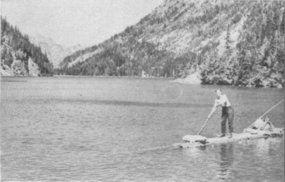 Rafting a lake averts a back-breaking hike around it. 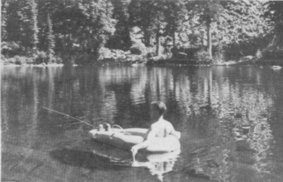 Pleasantest part of the expedition—fishing a lake to see how its trout are doing. 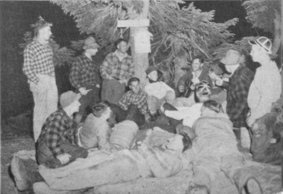 Day’s end and the planters relax. But they're not too tired to listen to a good story.

At meetings, for Instance, the man who is currently carrying the cowbell and cane must never let them out of his possession. If they're swiped from him, even for a moment, he is fined $1, and the "thief"—if caught—to assessed a like amount. Fines are imposed at the drop of a hat. If one member objects to another's cigar, the second may have to pay fifty cents for smoking it. Even a slip of the tongue, when a man is addressing the club, calls for a cash penalty. At each meeting, half the members wind up paying fines,

The money thus collected, plus fifty cents a month dues, pays for equipment and the expense of trips into the mountains. It also buys such things as aerial photography of the back country—very useful when stocking plans are being made.

While good for taking pictures, the airplane is not likely to replace back packing in planting the high lakes. The Trail Blazers pioneered in airplane stocking of Seattle's remote waters in 1938, when fry-filled cans were parachuted from a seaplane. State agencies, impressed by the success of this experiment, used the club's data to inaugurate an airplane stocking program. But the plane cannot replace the Trail Blazer any more than It can replace the infantryman. It's of little help until the lakes nave been surveyed and their needs determined. The only way to get that data is to hike to them. Moreover, the airplane could not reach many lakes and streams situated among steep ridges.

Sunday's weather, sunny and clear, was in sharp contrast with Saturday's. Our schedule was not pressing: it called for fishing—a mighty pleasant aspect of the overall research. Since Don, Verne, and I were slightly incapacitated, we stayed at Nordrum. It could hardly be surpassed as a quiet. tree-flanked refuge, but its fishing was lousy that day.

Don and Verne got on a raft and poled along the brushy shore until they found a likely spot, then stillfished with single hooks and salmon eggs. I tried the same technique In other spots. I also moved around the entire lake in a rubber boat, using a triple-hook lure. None of us had as much as a strike.

Kniert, Tillotson, and Mathewson double-checked Rock Lake with eggs and flies but got no rises. Tillotson and Mathewson then swung over to Lake Judy and found fish jumping in the shade. They caught seven nice rainbow and one cutthroat in the first half hour.

Meanwhile George Kniert cut cross-country to meet Frank Mortimer, Bob Johnson, and Jack Rollo at Lake Carol, where he took a couple of ten-inch rainbows, wet-fly fishing with 1 1/2-pound-test line. Bob. Frank, and Jack got their limits of twenty, all rainbows averaging eleven inches. They reported that the trout were twice as scrappy as those in the low lakes, and more cagy, too.

Although Carol could be considered a hot spot, the fellows concluded It had been overstocked, since the four-year-old trout were not as large as they should have been. Over-stocking is carefully checked by the club, because It's a mighty quick way of ruining a high lake for good fishing

The last group—Charley Yadon, John Pfister, and Clayton Kilbourne—set off to ascertain whether any of the short-cuts suggested the day before were feasible. Carrying field glasses, cameras, And lunch, they climbed the highest peaks. The day was clear, and distant ridges and rock cliffs were visible through the glasses. Ten lakes could be seen in the foreground with the naked eye. The men took sectional pictures of the surrounding country, later to be butted together for route mapping. They found that current information about a possible shortcut was partly accurate, but that the trip would be long, time-consuming, and extremely dangerous in foggy weather.

All facts and findings resulting from the trip would be written up later, and made available to hunters, fishermen, state game-and-fish men, and the U.S. Forest Service.

Obviously the Trail Blazers are not out to plant themselves a series of private fishing holes. They want to catch their limits, of course, but they want other anglers to get theirs, too. They reveal, in fishing guides, what kind of fish they have planted, and where. And they offer advice about the easiest ways to get to any of the streams, lakes, and potholes they stock,